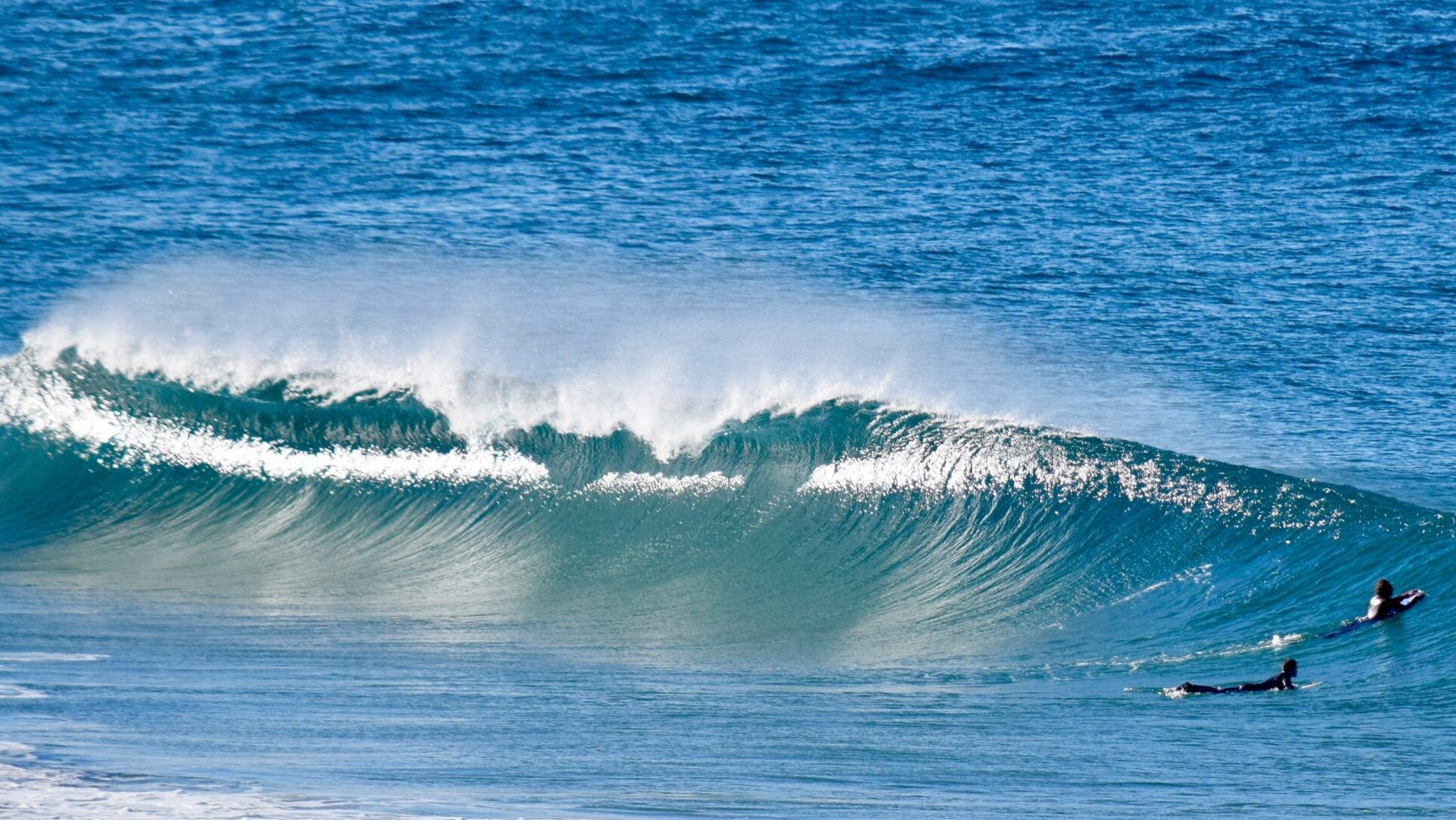 What could be better to see the sun reflected on a wave that is about to break?

But that sun. There is every reason to be careful about that.

The number of people with skin cancer is only increasing. And were you also burned as a child and in your youth? Then your chances are doubled of developing skin cancer at a later age.

There is only one way to prevent this. And that’s by protecting yourself.

In this article you’ll find:

Thanks to, among others, the KWF (Dutch Cancer Society), Professor Mike Climstein from Australia and Frederike Fransen, general practioner from the Netherlands for the help with this article.

Aware of the risks for all water sports enthusiasts

With this blog post we want to encourage everyone to take good care of their skin and to protect it. Be aware of the risks of outdoor sports and especially water sports.

My personal reason for this article is that actinic keratosis I was diagnosed with in 2019. These are rough spots on the skin. It looks harmless, but it is a precursor to skin cancer. It mainly arises in places where places on your skin have been exposed to the sun’s ultraviolet radiation.

Actinic keratosis is benign, but it can gradually turn into squamous cell cancer if you don’t do anything. So you must already be treated.

What is known about skin cancer risk for surfers?

A simple search in Google for the danger of the sun for surfers immediately yielded an interesting study with a striking result for surfers. According to this 2015 study by Professor Climstein of a survey of 1,350 surfers from Southern Cross University, surfers are three times more likely than the average population to develop melanoma.

Melanoma is the most serious form of skin cancer and can metastasize, meaning it spreads to other parts of your body. Melanomass is among the top three most common forms of cancer in the age group 18 to 35 years.

An even more recent 2020 study by Professor Mike Climstein of Southern Cross University shows that surfers are even six times more likely to develop skin cancer. That is because they are more often exposed to UV radiation from the sun (and reflection from the water(. You can read more about the effect of UV radiation later in this article.

Not only surfers, but also swimmers and stand up paddlers were included in the study, so basically all forms of water sports with high exposure to the sun and its ultraviolet radiation.

As a surfer you run a higher risk. Add to that the fact that surfing is becoming more and more popular. Not only wave surfing, but also kite, wind, foil, wing surfing and paddle boarding are growing in popularity. And that the sun is getting stronger and stronger due to depletion of the ozone layer. Then the conclusions below are not surprising. Alarming though.

A number of conclusions from the study

The study from 2016 shows, among other things, the following:

That’s bad news when you surf. And if this isn’t cause for concern enough, realize that sunburned skin at a young age doubles the chances of developing skin cancer later. And that about a third of new patients will develop skin cancer again within five years.

You might think that surfers in Australia are much more likely to get skin cancer (more sun, closer to the equator). That turns out to be not so bad. Or actually disappointing. The contribution of UV as a risk factor is 96% in Australia and 92% in the Netherlands (the so-called PAF score). See the world map below for some more explanation.

You can also see on this map that even the Netherlands, like Australia, is one of the red-colored countries where UV radiation is associated with the number of melanoma diagnoses.

How does skin cancer develop?

Skin cancer can be caused by direct ultraviolet radiation (UVR) from the sun. Exposing your skin to sunlight for too long will damage your skin. And because water and sand also reflect the sun, the UV radiation from the sun on the beach and on the water is even stronger.

As you can expect, June and July are the months when the UV radiation is strongest. You can see that clearly in the graph on the right (which is data from Lisbon but it represents other places in Europe).

Sunburn is particularly problematic because the number of times you get sunburned increases the risk of skin cancer throughout your life.

One study shows that in women who had at least five blisters from the sun when they were 15 to 20 years old have at least a 68% increased risk of skin cancer.

What can you do as a surfer?

The good news is that you can do a lot yourself to prevent skin cancer. Below you can read the 12 tips.

What can you do to protect your skin before, during and after surfing?

Lubrication is therefore crucial. But with what? Which sunscreen? And which sunscreen stays well in the water?

The type of sunscreen does not matter, says the KWF (Dutch Cancer Society), partly because all types of brands must comply with European legislation. In addition, a qualified safety assessor validates whether the substances used in the cream are safe.

In terms of safety, it does not matter which sunscreen you use. However, you may be allergic to certain substances that one brand uses and the other does not.

Sunlight contains different types of radiation, including ultraviolet radiation (UVR), which is harmful to living organisms. The Earth’s ozone layer plays a vital role in blocking extremely harmful UVC, allowing only UVB and UVA to pass through.

About 80% of the sun’s rays pass through clouds or fog, so that you can easily burn even in cloudy weather. Even when it is cloudy, the skin can still burn.

In addition to protecting your skin, it is important to check your skin regularly. Watch for areas that start to itch, bleed, or open and then heal poorly or not at all.

Look at moles to see if they itch or if you see changes such as:

A melanoma usually arises from ‘intact’ skin, but can also arise from an existing mole. To be able to recognize a (starting) melanoma, there is the ABCDE rule, translated from English.

A spot is suspect if it has one or more of the following properties:

Checking your skin via an App

You can also use the app to check your skin. For example with SkinVision. With this app you can check spots on your skin.

Since very recently (spring 2021) there is also the Derm Assist app from tech giant Google. With this new app you can identify suspicious bumps to discover if it could be skin cancer. The app is said to have already been approved at European level for medical use.

When in doubt: go to the doctor. The doctor can properly determine what the next step is. You may then be referred to a dermatologist, the expert for skin problems.

Enjoy the most beautiful sport in the world. And protect yourself against that wonderful and dangerous sun.

And thanks again to the KWF, Professor Mike Climstein from Australia and Frederike Fransen, general practitioner from The Netherlands.

Where to surf in May?