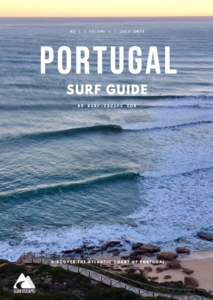 Surfing in Portugal means surfing in the sun, enjoying the bluest water that the  Atlantic Ocean has to offer, and surfing at a myriad of amazing locations.

Alongside France and Spain, Portugal is one of the most beautiful destinations for a surf vacation that you could possibly find in Europe.

Have you decided on Portugal as the destination of your surf vacation? Click here to have a look at accommodation you could stay at in Portugal. If you book long enough in advance, you will be able to find a good deal.

Northern Portugal is a bit less touristic. The temperature is also slightly lower there, and the touristic hotspots are simply a bit more to the south. However, surfing in and near Porto (a wonderful city!) is great. Additionally, near Porto, you will find Matosinhos. This is the perfect place to catch some waves before you go sightseeing in Porto.

In this chart, you can see the monthly average of the build-up of the waves (a combination of wind and ground swell), as well as which type of wind is dominant in this area. Credit goes to Magicseaweed.com!

The winter provides the most amazing waves in Portugal. From November until February, there is a continuous supply of high-quality waves. In fact, the entire coast of Portugal has plenty of waves to offer during the winter.

On average, the wind also comes from the right direction more often during this period. November and December offer stronger wind and, occasionally, even some rain. But as soon as the days start getting longer again, the sun will come out of hiding more often as well. Sooner rather than later, it will already feel like spring again. And you will definitely feel the strength of the winter swell!

South of Porto, you will find one of the better big wave surf spots. Like Nazaré.

Nazare is the sleeping giant, under the radar for years as a beachy to hit when everywhere else in Portugal was flat its potential for the biggest rideable surf on the planet is now well known.

Nazaré where the world record was broken in 2011 for riding the highest wave ever – a wave that was 27 meters high!

Nazaré is an authentic fishing village. Since the coast of Nazaré is situated in a deep trench though, the waves gain extra momentum before they reach the coast. That makes for high and powerful waves!

Peniche lies a bit more to the south of Porto. It’s one of the most well-known and popular places to go surfing in Portugal. There are a large number of surf camps in this area. Various Dutch and German surf vacations visit this destination because it offers great waves, as well as a wide selection of choices as to where you would like to surf. Peniche is a small peninsula that extends into the ocean. There are a number of well-known and really good breaks there that aren’t too far away from each other.

To the north of Peniche, you can find the surfing hotspot Baleal. The waves in this area mostly come from western and northern directions, and the wind blows from the south.

In the middle of Portugal, you’re in the Lisbon region. And even though the capital is an hour’s drive from some good waves it’s not too busy. Like Peniche it’s got plenty of options for the wind and it’s a good base in the winter when the sheltered spots open up.

Ericeira is one of the picks here. Surrounded by great spots. And a World Surf Reserve.

Ericeira is a beautiful coastal town, and also a fishing village. This village has the perfect holiday vibe. The small white houses make this surf spot look like the classic Portugal you know from the pictures! You can also find a number of smaller beaches there.

The real surf spots, however, can be found in the wider area, just outside of the village. The most well-known surf spot here is, without a doubt,

When the waves come from the west (or southwest or northwest, for that matter) and the wind comes from an inland direction, this spot is absolutely amazing – especially thanks to its high-quality waves that break over a reef. If you are a bit more experienced, the waves here are very doable. Ribeira D’Ilhas is slightly to the north of Ericeira.

Foz De Lizandro is to the south of Ericeira, and it offers more of a beach break. However, since the river extends into the sea here, the banks form a good break for the waves. The biggest advantage of Foz is that it’s a lot less crowded. The waves are slightly less powerful – or at least, compared to the amazing surf conditions at Ribeira D’Ilhas.

There are plenty of surf spots in the wider Lisbon area, and it’s where a lot of locals like to surf. Especially on the weekends! Several well-known spots include Carcavelos, Guincho (a popular spot for windsurfing), Bolina, and Monte Estoril. These spots are extremely enjoyable when there’s a powerful swell from the southwest and wind blowing from the northeast.

The most well-known surf spots here include Sao Torpes, Arrifana, Odeceixe, and Amoreira.

Sao Torpes might not look all that impressive at first glance. It offers an average beach break that is relatively enjoyable for most surfers. But slightly to the south of Sao Torpes, if you follow some of the smaller roads along the coast, you can find a real treasure of a surf spot. Here you will find a spot where you can surf with the locals – and enjoy some far higher-quality waves!

Odeceixe is stunning – there’s a reason why it’s won an award! It’s known to be one of the most beautiful beaches of Portugal. Odeceixe catches a relatively large number of waves, so your chances of catching a satisfactory number of waves are almost guaranteed. The quality of the waves isn’t amazing, but it’s certainly good for Dutch standards. Odeceixe is said to be a bit of a hippie town, which is reflected in the relaxed atmosphere there. And it’s a great location for a family surf vacation.

Amoreira is the place to be during the low tide. Its banks have been formed by the river and they make for nice waves . It’s a good surf spot because it’s generally not too crowded.

Soon you’ll find more info about the Algarve. But we do have a tip for you:

>> Tip for the Algarve area:

Surfing in the Algarve

The beaches in the Algarve leave you breathless. Surfing in the Algarve is a true feast. During the summer months, it’s not so special. But when the Atlantic Ocean starts to get a bit nervous from September, keep an eye on this southern piece of Portugal. Also in the winter months, the Algrave is a great surf escape for European surfers. With springlike weather. Secluded beach breaks, a wide swell window, and a great range of surf spots. Arrifana, Sagres, Zavial, Carrapateira, the list goes on.

Discover all about surfing the Algarve.

More stories about the surf in Portugal

Surf Jur - 01/10/2018 0
Surf in October It's one for your bucketlist: surfing in Europe in October. Europe made a transition from summer to Autumn. Days are getting shorter....

Where to surf in Europe in August?

See the beauty of the Algarve