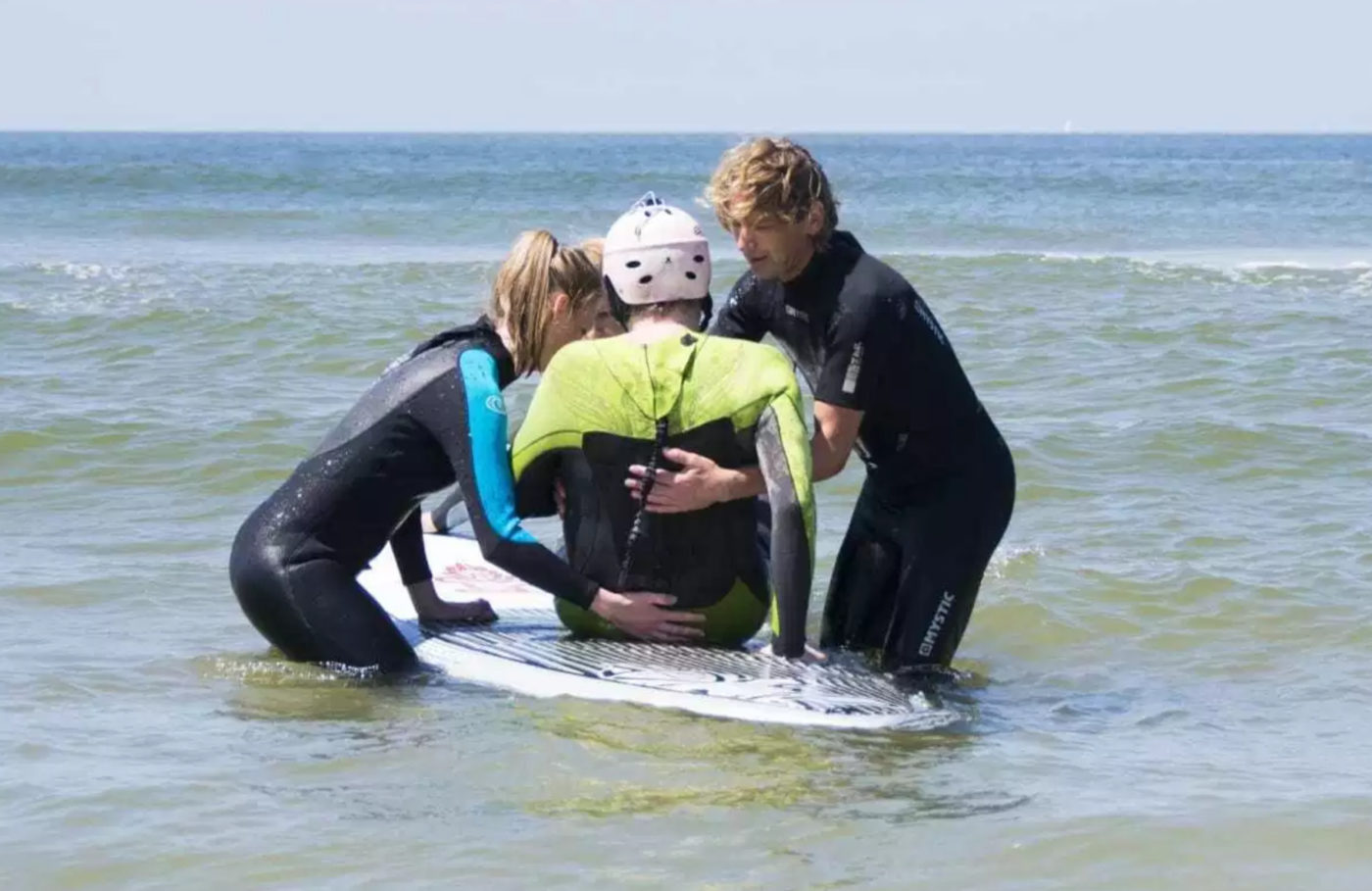 His entire life rehabilitation specialist and surfer Tijs Bezeij has been fascinated by the sea. So for good reason he is very satisfied with his place of work in Heliomare, in the dunes of Wijk aan Zee.

This is the place where Tijs came up with his plan to start his new physical therapy and his foundation Surftherapy. This is already the fourth season Tijs is guiding unilaterally paralyzed patients in there rehabilitation process.

‘Surfing with rehabilitating patients originated when I was walking here with my surf board and ran into a patient of whom I thought: he is at a loose end. He was stuck in his rehabilitation process, learning how to walk failed.

So I said: “Why don’t we go surfing?” That’s how it began. And the remarkable thing was: it had an immediate effect on him. He even stood upright on his board. I took his picture instantly.’ Tijs laughs. ‘And even then people did not believe it. They probably thought I had been photo shopping it.”

SURFING ON THE KNEES

Together with Tijs, three participants of surf therapy have pulled up a chair: Paulien (31), Richard (52) and Dirk (69). Every Friday afternoon, when the weather is good, they are in the water.

Richard: ‘In 2017 I ended up at Heliomare. I was in day treatment and ran into Tijs who asked me if surfing would be up my alley. I immediately thought that was a nice idea. Surfing actually was my first encounter with sports again and I noticed it made me very happy. Being in the sea, picking up speed through a wave, learning how to steer. You work on your balance, you become more daring and at a certain point you are even confident enough to stand up on the board.’

Pauline: ‘When Tijs asked me I immediately thought: let’s do it, even though I could not picture it. The first time I was a little insecure. It’s cold, exciting and you are so focused on getting on that board.’

Tijs: ‘You sit on the board, you’re not lying down, so in fact you are much more unstable than a ‘regular’ wave surfer. And still, they tend to quickly switch to automatic behaviour. By changing your focal point, you focus on the horizon. Because of that you start to move in a completely different manner, more goal-oriented. The moment a good wave approaches we give them a little push.’ Tijs laughs. You can’t paddle with one hand for that matter. At the beginning everyone leans on their ‘right’ side for 80%, after that it becomes more natural.’

Dirk: ‘I had a catamaran from the age of sixteen. Therefore I can read the waves quite well so my introduction to surfing was successful. Only sitting down did not work, it made me get spasms in my legs, but I found out that if I went down on my knees, it worked much better. That gave me confidence. Amazingly enough it went well from the start: a wave approaches and they give you a push. I quickly realized that by leaning to the right, I could also steer.’ Laughing: ‘Right until the moment I found myself parallel with the waves.’

‘Waves are unpredictable: you have to react fast and because of that you react automatically.’

In order to give a scientific basis of the positive effects of surfing on the rehabilitation process, Tijs started to work out a theory. ‘We still have to do field tests, but we can see that our participants in the water show automatic behaviour. If you are learning to walk again, you are literally thinking; where do I place my leg so that I don’t fall? By thinking your actions become slow and usually awkward. 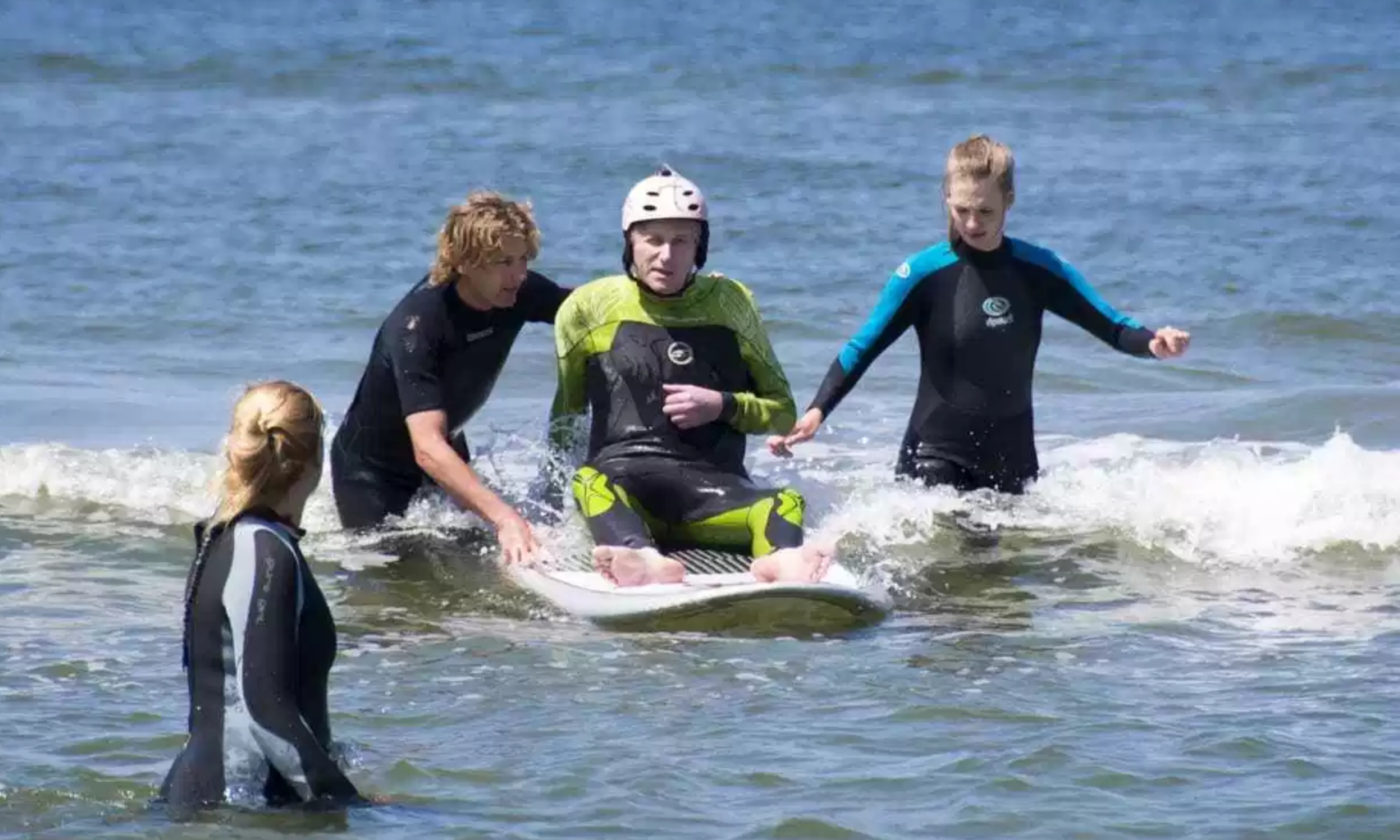 Think about the conveyer belt at the airport where at the end a voice announces: Mind your step.” When you hear that message, you tend to act awkwardly.

At sea during surfing you learn to let go.

Waves are unpredictable, you have to act fast and because of that you react in a reflex. You make an appeal to the fast part of your brain and override the damaged area.’ Tijs gives an example. ‘There was a lady who’s left arm wasn’t functioning. During surfing she fell in the water and nearly got hit by her board because the next wave was approaching.

When she came out of the water she said: ‘That just went well, I was lucky to be able to react with my good arm.” But when we looked at the footage we saw that she stopped the board with her bad arm.”

Tijs laughs. “She couldn’t believe it and was convinced that the camera footage was the mirror image. We see amazing things happen during surfing. The participants really make progress.’

We also see that progress reflected in the everyday life of participants. Richard: ‘I found surfing the first time a very good preparation for the holiday that was planned right after it. It gave me confidence to go into the sea.’

Paulien: ‘Through surfing I have more balance and more self-confidence. If, after a surf lesson, you find that you caught good waves, it makes you think: I can do this.’

Dirk: ‘I’m very impatient and maybe I can’t see the effects right away. But therapists tell me that I have more balance and that I am more able to keep my balance.’

Richard: ‘It also helped me in learning to walk again without a cane. Precisely because we get that push when we are on that board and also because we experience some spectacular wipe-outs, it became easier to train how to fall at the therapy centre. I gained more self-confidence. Because that was my problem at a certain point: That I was afraid to put my cane away.’

Tijs: ‘With Richard I saw his self-confidence grow. At the beginning everyone thought he was acting unsafe. But my perception changed completely when I went into the water with him. He is not acting unsafe at all.’

Laughing loudly: ‘He is just not communicating what he is going to do. Richard is good at doing unexpected things. Last summer he fell off his board and I said: “What are you doing?” To which he answered: “I’m going to swim to my wife.” Or once when he went under water, head and all: “Okay great, this way I can check whether I can go under water with a snorkel.”

Surfing with Richard has given me so much information. Precisely because he is not actually being dangerous in his movements, but he thinks it through, always.’

‘The fun I have during surfing really affects our family life’

Just like with The Surf Project, with whom Surftherapy is in close contact with, Tijs wants his therapy to be available for everyone. Preferably all year round.

For that purpose he first wants to prove the effect of his therapy using a pilot study. Tijs: We only notice that we can’t use the North Sea all year round. All our participants suffer from muscle spasms, tensions and convulsions. The cold is not a good influence on that. So we can gain even more profit.

Therefore the idea arose: find a piece of Netherlands where the water temperature is higher. It turned out to be Bonaire.

We now have gathered a group of nine participants, with whom I want to go to the island for ten days. It is a very mixed group. I also want to prove that it does not matter when you start with surf therapy. Even when three years have passed since your stroke, you can still gain so much from it. To prove this research is needed.

For that reason we would very much like to join the International Surf Therapy Organization (ISTO).

With the other organizations that are part of the worldwide network we can share experience, knowledge and possible locations. In doing so surftherapy gets a greater evidential value. That way more and more participants can profit from the great sport of surfing.

Why does surfing make us so happy?

Tijs explains. ‘In fact during surfing the same brain area is addressed as the one that plays a role in addictions. That creates the feeling that you want to go again, and again. The environment also plays a role. Between the waves you feel powerful and insignificant at the same time.’

But also the supporters on the beach, family and friends, are part of that euphoric feeling.

Paulien: ‘I remember I caught my first high wave and I stayed on my board. I just succeeded.’

Dirk: ‘My partner is used to me loosing myself in everything I do, so she is not surprised. But she can really see that my self-confidence has grown.’

Richard: ‘There is a video circulating the net in which I can be seen being launched from my board. The fun I have during surfing really affects my family life.’

Tijs: ‘I thought it was so nice that time when your wife was watching on the shore and she became more and more enthusiastic. She was shouting harder and harder. Well yeah, watching physiotherapy in a gym is not that exciting. This, however, is.’